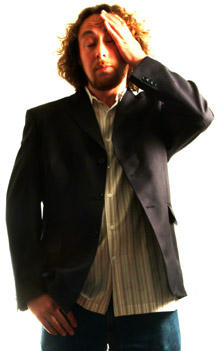 Once upon a time not that long ago,1980 – Cohen was walking home from school when he spotted a old bust up guitar in a skip, so as kids do he took it home even though he did not know much about guitars he did know that it wasn’t going to work without strings on, so after a visit to a guitar shop in his local city he eventually had a fully working although not brilliant but, faithful guitar. So after years of playing it to no avail he met Steve, Audus as known by his friends taught Rob how to tune his plank of wood up and together they decided to form a group “Junkie Bunny” so armed with a Drum Machine, Two Guitars, Keyboard and a 4track they borrowed from school, they decided to take on the world.

Unfortunately the world didn’t want them even though they were writing classics like “When Junkie Bunny Wakes Up It The Morning” , “Dieing On A Rollercoaster Isn’t Nice Not At All Really” and “Watch Out Junkie Here Comes That Nasty Farmer With A Gun”. So after enough songs recorded to make 4 albums and one gig in Steve’s house in front of Sid, Sherene, Piggot and Lisa. Junkie was alas no more and Steve went on to form Cus Cus with Sid, around this time Cohen bumped into Piggots brother Steve in a pub and ended up joining them “Fools Club” was the name of this band and so Cohen went from jokey Cabaret music to being in a full on thrash metal band who’s roots lay somewhere between Nirvana and The Cult, through Fools Club, Cohen met Paul Young. No not the bloke that wherever he lays his hat that’s his home, a bassist by the same name.

Cohen only managed to stay with the Fools Club team for about 6 months, and then got thrown out for liking Jimi Hendrix too much. A few weeks later he bumped into Youngy and another seed was sown, Paul was wanting to start up his own band an indie band and knew a drummer called Seb and another band was born “Marmalade Sun” this is where Cohen learnt his trade, Songwriting, Touring, Studio Recording, Drinking and generally not getting paid anything by any of the venues he played just like the majority of bands out there across the world living the Rock ‘n’ Roll dream, during this time over the six years they were together after various band line up changes it all got too much, and after the fifth drummer Bruce left they struggled to find another drummer.

So they all went their separate ways, in the background during this time Cohen had been working with another old friend doing some studio work and writing songs under the project title “Indian Rope Trick” this is when Cohen realized that maybe if he got his own studio he could work on his own material, so rob started recording his debut album “Written In The Sky” August 1999, after “Indian-Rope-Trick” split. So Cohen decided he would start something new, so While he was in Cornwall for the eclipse, He started getting a few ideas about what he was going to do when he got back to his hometown. “When You’re Turning – R U Still Learning?” So there it was “When You’re Turning” the first penned title wrote from the sky, for the album.

The rest as he says fell into place after that, “Honeybees & Butterflies” was a song wrote in Cornwall sat in front of a tent with a few friends a few beers and a fire, all very ad lib into a Dictaphone. But despite it’s rawness Cohen felt to take the song any further (To re-record) would spoil the spontaneous feel of the song, so here we are the present day with three albums in the pan and another one on the way. From jokey Cabaret, Grunge Metal, indie through to Mufty as he calls it. Yes it has been a rocky ride but with a little “Ribbon Red And Confidence”, here’s to the future and long may it be bright! Keep chasing those white rabbits!